A project of the Georg & Agathe Foundation, vonTrapp.org celebrates the von Trapp musicians, whose real-life story and careers inspired the 1959 Broadway play and 1965 Hollywood movie, The Sound of Music.

The project archives the Trapp Family Choir and Trapp Family Singers’ 1934-1956 musical career, through which they become known as "the most booked attraction in U.S. history".

The groups performed early music (16th-18th-century motets and masses), folk songs in over a dozen languages, acapellas, and ballads with recorders, viola da gambas, and spinets in accompaniment. All told they performed in 2,000 concerts throughout 30 countries, in venues ranging from high school auditoriums to iconic concert halls.
​
vonTrapp.org educates about the family who brought joy and comfort to over 3 million people and in their day were a household name within the United State and Europe for their musical, artistic, and humanitarian merits.

A modern take on the  von Trapp coat-of-arms

The family motto, which is depicted in Latin, is 'Nec aspera terrent' meaning 'Hardships do not deter us,' or 'Let nothing difficult frighten thee'.

As an organization founded by descendants, we feel inspired and guided by these timeless words. 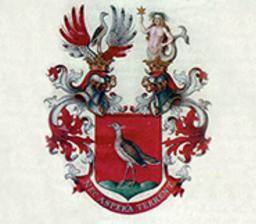