1946-1950
After WWII came to a close, the von Trapp family was living in the United States. The family felt deeply pained for those living in war-torn Austria. To help those they knew, the family sent clothes and supply packages to Georg's old naval officers.

Soon thereafter, the family received a plea for help from  Major General Harry J. Collins (U.S. 42nd Rainbow Division leader) who was stationed in Austria, stating starvation was rampant, with citizens facing life and death. In response, the family collected and donated the proceeds from their concert souvenir sales to send aid to Austria.

These relief efforts were some of Georg's last acts, as he passed away in May, 1947. Over the next four years, the family continued collecting clothing and food at their concerts and donated their souvenir sales to the cause, in total sending 275,000 pounds of aid. 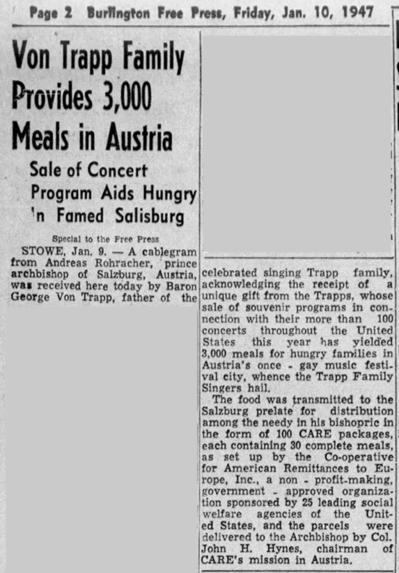 Partial Listing of Sources:
"Memories Before & After The Sound of Music" by Agathe von Trapp, "The World of The Trapp Family" by William Anderson and David Wade,​ ​newspaper articles and Wikipedia

Did you or someone you know help or receive aid from the family's post-WWII relief effort?  ​ We'd like to hear from you!