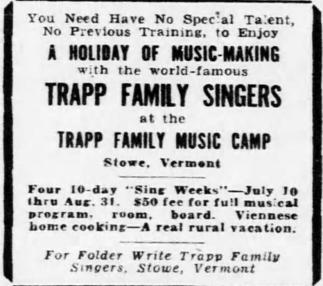 Cooking meals for the

Did you or someone you know help or receive aid from the family's post-WWII relief effort?  ​ We'd like to hear from you!

Partial Listing of Sources:
"Memories Before & After The Sound of Music" by Agathe von Trapp, "The World of The Trapp Family" by William Anderson and David Wade,​ ​newspaper articles and Wikipedia

Young and old, from diverse backgrounds, attended the camp, from all over the nation. Over the course of the eleven years the camp ran, thousands of people participated. Many took their camp experiences back home with them and some even started choral groups of their own. Some groups even held informal camp meet-ups for alumni to gather and sing.

Although a lot of work the family found great pleasure of sharing their love and knowledge of music with others. 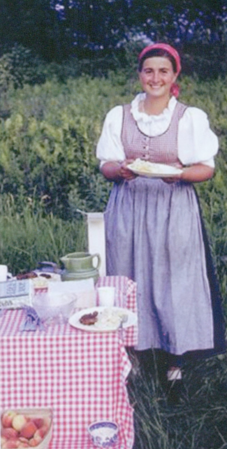 To get the word out about their inaugural summer music camp the group produced brochures, ran newspapers ads, and made announcements at the end of their performances while on tour. The first Trapp Family Music Camp opened on July 10, 1944, with the Governor of Vermont presiding over the ceremony. That first summer approximately 400 people came to Vermont to learn about music from the Trapp Family Singers.

Every member of the Trapp Family Singers performed multiple roles that contributed to the camp's success. They taught singing, folk dancing, and how to play the recorder, prepared meals, washed dishes, made beds, laundered linens, and all the other aspects of running a camp.

An Annual Summer Event
During the summer months from 1944 to 1956, the von Trapp family hosted four sessions of 10-day "Sing Weeks" that offered music training for the general public.

Sing Weeks were a popular Austrian pastime. Many family members had attended them while in Austria and when the family came to the United States, they brought this experience with them. After several successful tours performing and then settling in Stowe, Vermont, they thought to start hosting their own annual summer Sing Weeks, run as a summer camp. During the Christmas holiday of 1943 they found an old abandoned Civilian Conservation Corps camp, near the family's farm which would be a suitable place to run the Sings Weeks. In May of the following year the family secured their lease of the camp for ten years from the State of Vermont.

The camp's old barracks had several buildings which the family renovated with new plumbing and paint, as well as renamed after famous composers: Schubert Hall, Haydn Hall, Beethoven