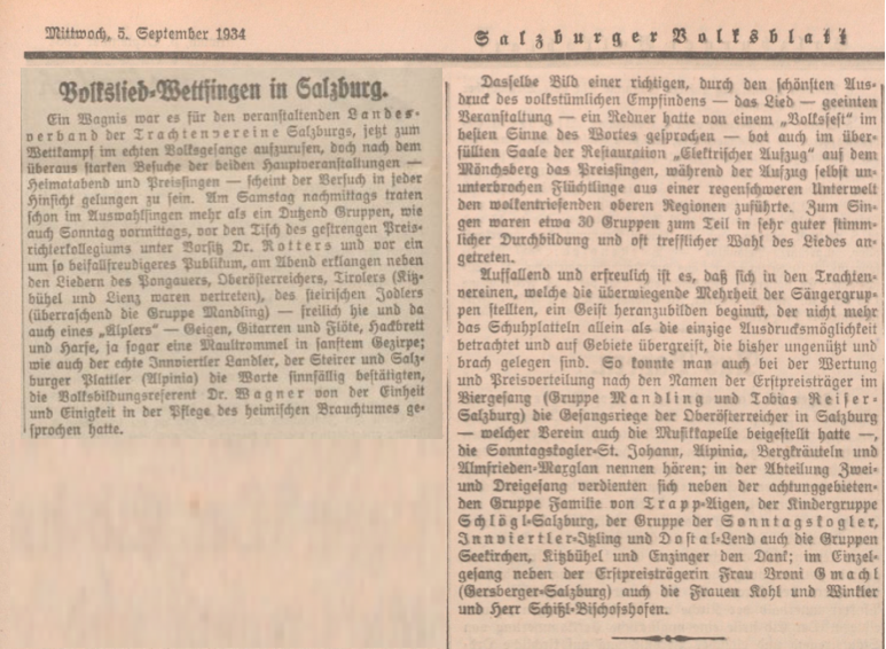 It was a risk for the organizers Landesverband der Trachtenvereine Salzburgs (National Association for national costumes Salzburg), to call for a folk singing competition, but after the strong attendance of both main events – homeland evening and award singing - it seems the attempt has been a success in every respect.

Already on Saturday afternoon more than a dozen groups performed in the elimination rounds, and again on Sunday morning, in front of the table of the strict prize judges under the leadership of Dr. Rotter and infront of the enthusiastically applauding public. In the evening, next to the songs of the Pongau, Upper Austria, Tirol (Kitzbuehel and Lienz were represented), the yodel from Styria (surprisingly the Mandling Group) – of course also here and there also an “Alpler” – fiddles, guitars and flutes, ‘Hackbrett’ and harp, yes even a mouth-orgen in soft chirping; as well as the real ‘Innviertler Landler’, the Styrian and Salzburger ‘Plattler’ (by Alpinia), the national education representative Dr. Wagner delivered meaningful words that confirmed and spoke of the unity in the caretaking of the nation’s customs.

The same picture of a true unifying event, through the most beautiful expression of the nation’s impressions – the folk song (Lied) - someone said it spoke of a “folk festival” in the best sense of the word – also offered, in the filled beyond capacity hall of the restaurant “Elektrischer Aufzug” (Elektic Elevator) on the Moenchsberg, the prize singing, while the elevator itself was bringing rain soaked refugees from the lower nether regions to the cloud filled upper regions. About 30 groups who took part, had very well trained voices and often perfect song selection.

It is noticeable and gratifying that within the National Costume Club, which the overwhelming majority of the singing groups represented, a spirit is beginning to be nurtured that doesn’t only represent the ‘Schuhplatteln’ alone as the only means of expression, but is reaching into regions that have heretofore lain fallow.  So one could also, at the competing and the prize giving, after the names of the first prize winner of the four vocals category (group Mandling and Tobias Reiser Salzburg) hear the names of the singing squad of the Upper Austrians in Salzburg - whose club also provided the orchestra - , the ‘Sonntagskogler=St. Johann’, ‘Alpinia’, ‘Bergkreauterln’ and ‘Almfrieden=Maxglan’; in the division for two and three vocals, next to the esteemed deserving group ‘Familie von Trapp=Aigen’, the children’s group ‘Schloegl-Salzburg’, the group of the ‘Sonntagskogler’, ‘Innviertler=Itzling’ and ‘Dostal=Lend’ also the group ‘Seekirchen’, ‘Kitzbuehel’ and ‘Enzinger’, were given thanks; in the single vocals next to the first prize winner ‘Mrs. Broni Gmahl’ (Gersperger=Salzburg) also the ladies ‘Kohl’ and ‘Winkler’ and ‘Mr. Schitzl’=Bischofshofen.